Ive sewn NL 6242 before, however only the top version so I decided to try the dress { VIEW A } this time.

I had remembered the pattern was a great success so I pulled out the cotton I purchased from Alfatex a few months back. I loved the tie-dye type effect which looks like a cloudy, overcast sky. I didnt expect the flocked pattern so that was an added bonus once it arrived – hazards of shopping fabric online. Luckily in this case it was a good hazard, or is there such a thing?!

I chose a bright orange piping (which was already in my stash) for the contrast along the undersides of the bust & midriff & continued the piping through the back. I had a little trouble matching the piping at the seams on both sides initially. The zipless side I managed to fix, the zipped side I figured the difference was so minute I wouldnt bugger with a good thing. For the zip, a white invisible did the trick however I used a slightly shorter one than specified.

I also remembered to increase the length of the halter ties but I still think they could be even longer…so next time….

I cut the pattern to my size and although it fitted well, the skirt was a tad tight over the hips at first so I let out the seams slightly just for a little extra space – perfect.  I noticed some bagginess at the back waist area after some wear. With regular straps this wouldnt have been a problem, but the nature of a halter neck means the bodice is pulling up on the front so naturally it will shift slightly on the back. I was going to remove the small bit of bagginess but instead I decided to try this magic “Sockenbremse” ( Socken = socks, bremse = brakes) instead ie. it turns your bare socks from neck breaking enablers into slip-proof pad-around-the-housers! I ran a small thin line of this over the top edge of the back & et voila…no more shifting back = no more bagginess! The latex comes in a variety of handy colours, can be used on a variety of fabrics but it does need around 10 hours to dry. Its also washable to 40 degrees which is perfect since I would never wash this dress any hotter. 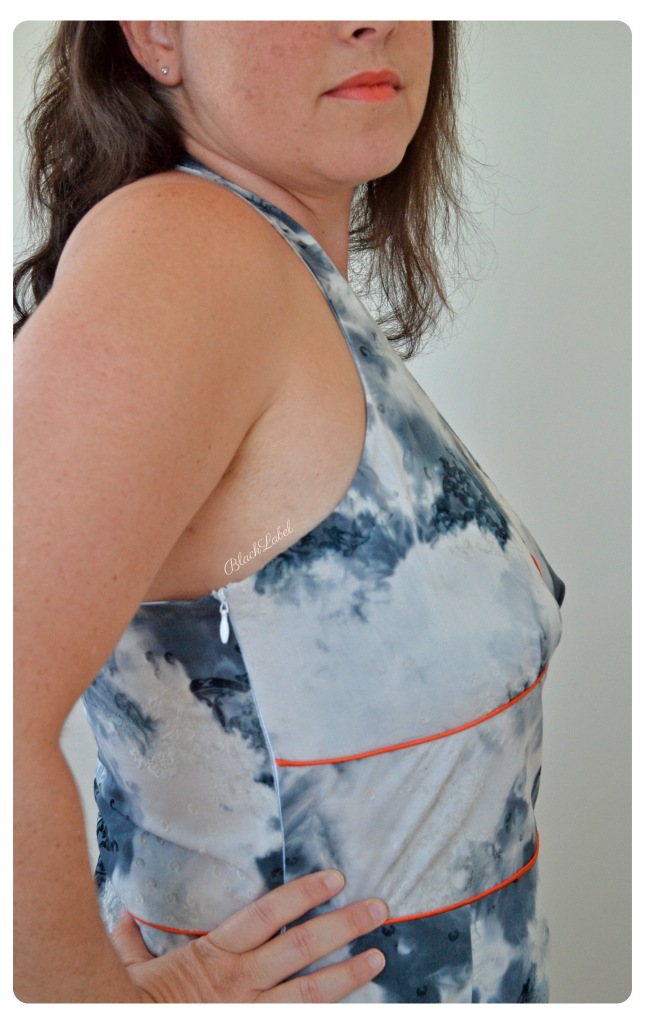 I used my 10mm hemmer gadget for hemming which I had much better results with this time round than the last time I used it. I think this hemming gadget works best with cottons though so I still feel like its a hunk-a-junk in terms of it being marketed as a “foot”. 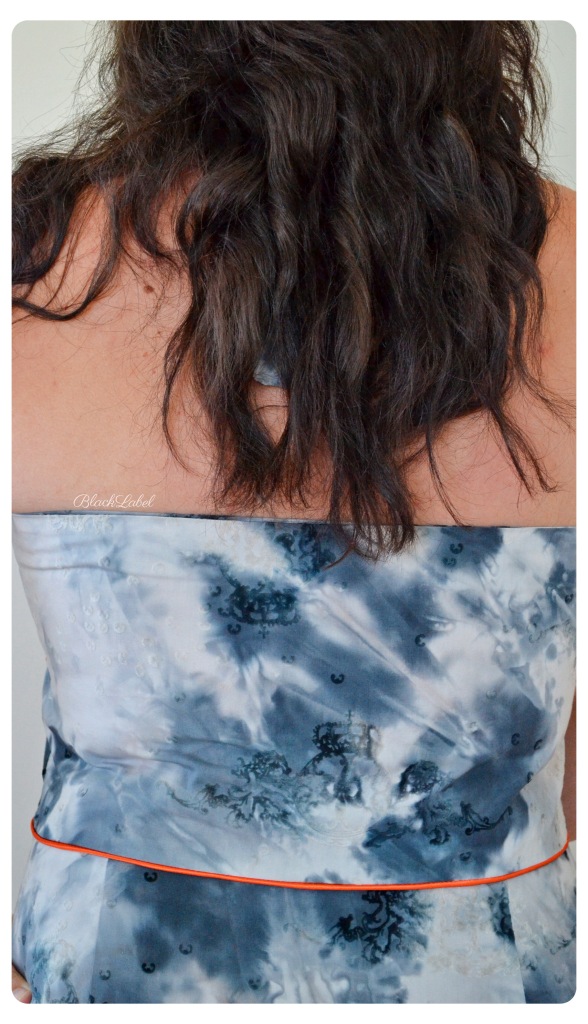 The pattern is relatively easy to construct and although I wouldnt go so far as to say its great for beginners, I do think an advanced beginner could tackle this with relative ease. 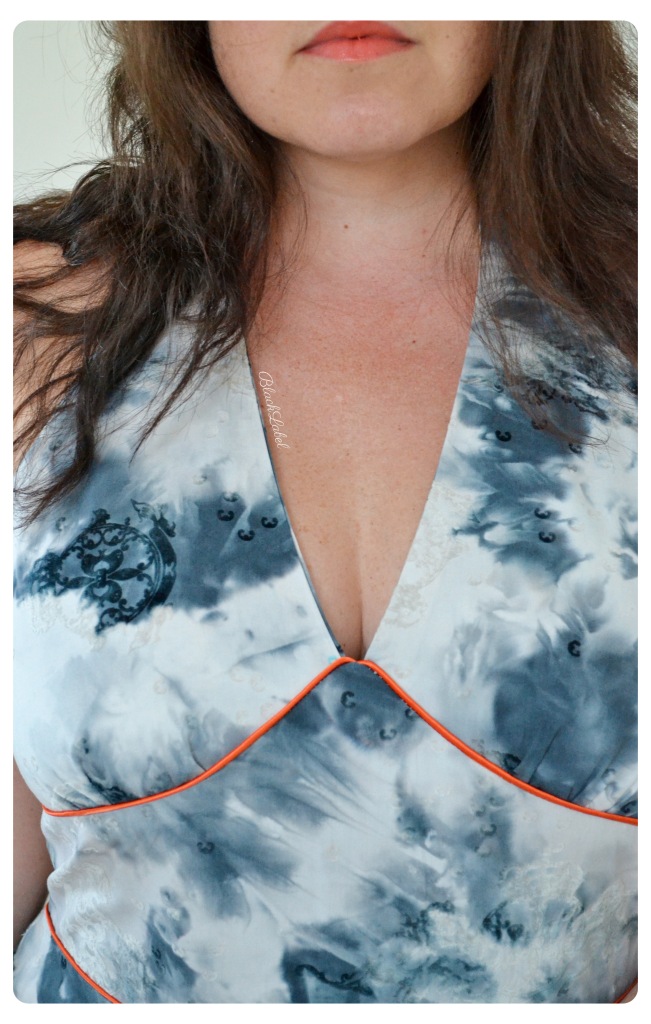 Thats all for today folks, till next time x

Lovely things, here is my breakdown of MMMay’13 Week 1.

Not terribly exciting since I had some stay-at-home days this week. I tweeted that I think I should make me-made pjs just so I can feel like even SAH days are me-made days. Enter Vogue 8888. 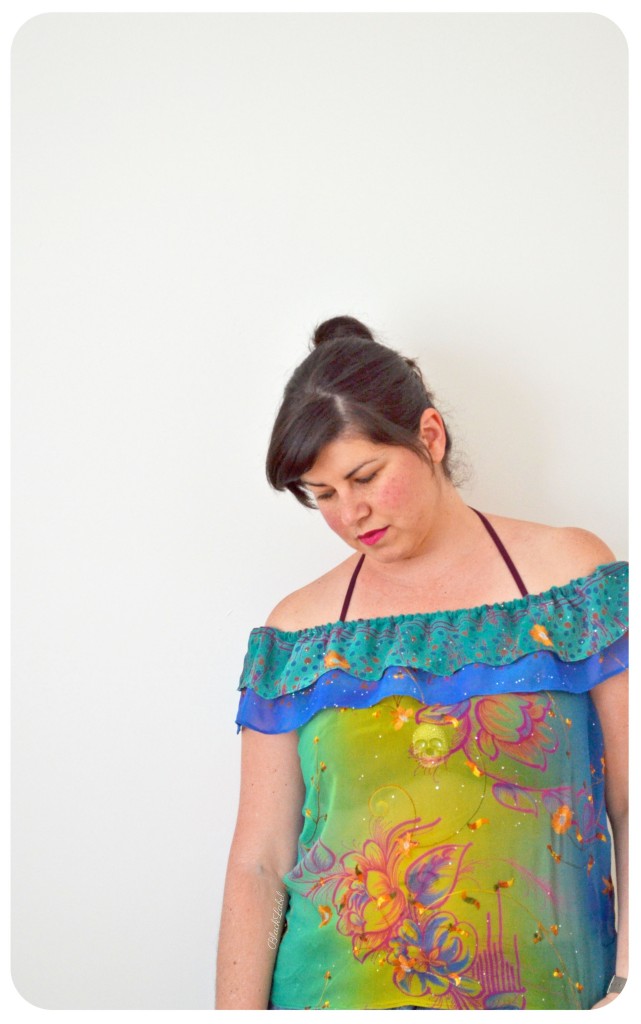 Taking pics of yourself is one hellava hard thing to do when you dont have the right equipment { OR } when you have the right equipment but the damn focus is being a pain.in.the.ass! { AND } there is so much to get done in 10 seconds before the self-timer hits the shutter…who knew! I had to have a good giggle at Dibs & the machine as she wrote about the trials & tribulations of self-portraiture in her post “How do you do it?” That last image with the apparatus over her head has got to be the savviest bit of photography Ive seen in a long time…it really made my day 🙂

Also, dont forget my giveaway closes on Wednesday so be sure to get your comment in if you want to be entered! Good luck x 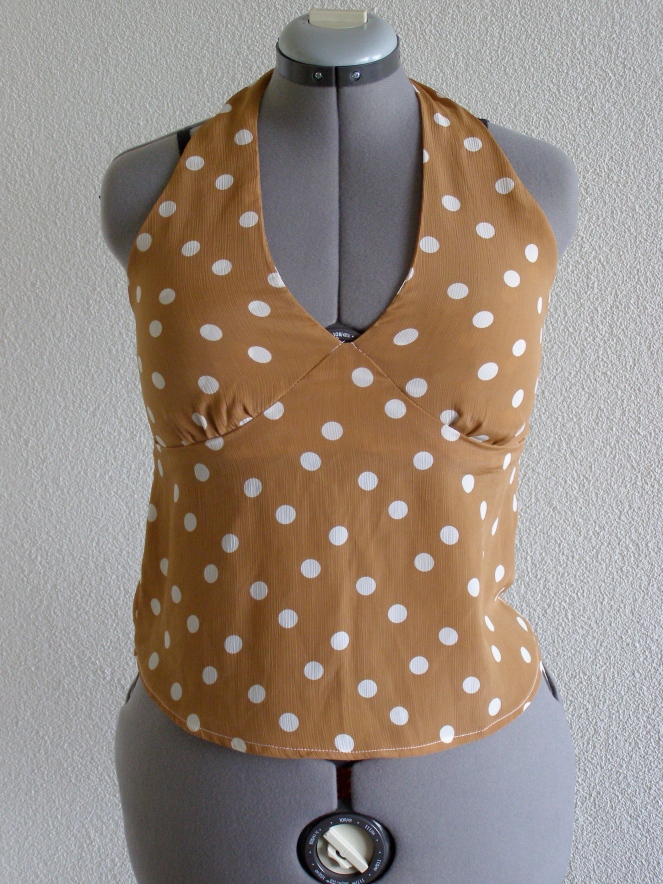 I {REALLY} love this pattern and when I first purchased it back in 2000 or 2001 I thought I would get much more use out of it, but then around 2003 someone borrowed this from me & it was never returned. Dont you hate that?  Since then I do not lend my patterns out to anyone. Back in 2010 I was able to track down another & ordered it immediately so I have been re-united with a favourite and I hope to make the dress one day….if it weren’t for the queue of course.

I found this pattern super easy. My version is made from a toffee brown, polka georgette however I left off the waist tie and side zip. After making this version, I made a plain black version however, I inserted the side zip and I made the halter ties slightly longer. I definitely think the zip is required, it just makes slipping it on so much easier. After making the toffee version, I realised I should have made the dress, it would have been super cute in the polka – alas, next time.

A great little halter to wear to the beach and 12 years on, I am still making use of the black version. I still have the polka version, its just a little tight 😦

Highly recommended for all.

Thanks for stopping by & have a good sunday x

This pattern is one of my first ever Vogue patterns to try & probably one that got me {HOOKED} on sewing way back when in 2001.

I made this black & white hibiscus print halter top many many years ago & because it screams {SUMMER} I dont get to wear it terribly often {maybe once or twice a summer season} so its stumbled through years of summers without showing any ‘wear or tear’. 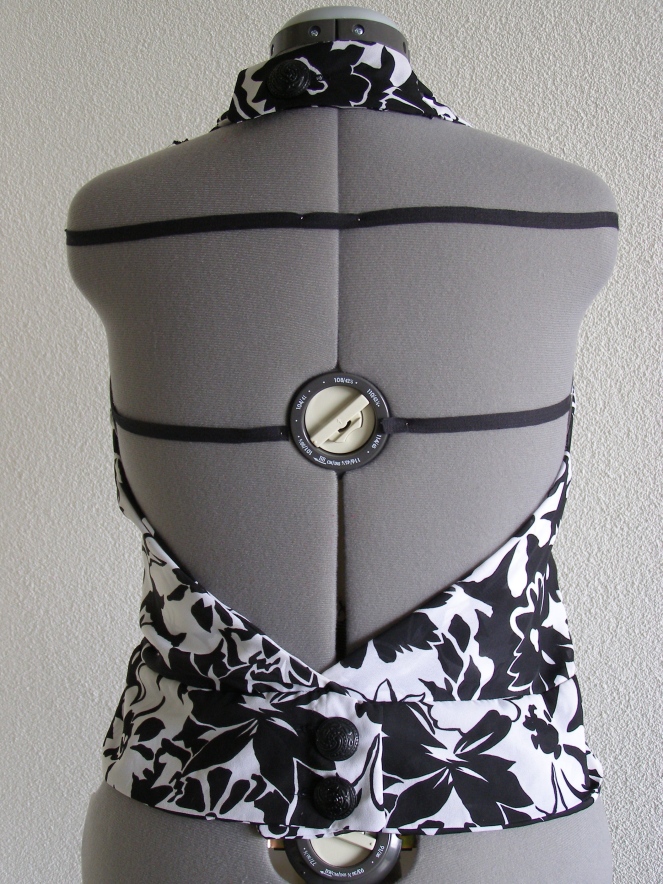 I sewed version C which is the bias cut halter with back-button neckband, crossing over at the front with a lovely low back buttoning waist band. Tight enough to look fitted at the waist but loose enough to be comfortable. I used a polyester georgette which is probably not that user friendly for summer but since there is so much natural air-conditioning going on, poly was not a {SWEATY} problem.  I would imagine a cotton, soft linen or silk would be more suitable though. Being relatively beginner back in those days, I made a huge boo-boo & stitched the side darts too small so the fit around the side boob area was gaping & I had to go back to adjust…the thrills of a learning curve. yay.

The pattern has been {OOP} for some time but you can find a copy here if you are interested. I would recommend this pattern to anyone from an advanced beginner even though Vogue calls it a ‘basic design’.  Dress it down for the beach, dress it up for an evening dinner while on holiday – a lovely pattern with endless possibilities.

Thanks for stopping by x